The story of the author
of the studio that tells
why you should sit here
by the fireplace, drink
English tea and dive
into the universe of Sir
Arthur Conan Doyle.

The “British” studio is the first studio in Mama Ro, which was decorated so carefully, down to the very last detail. The kitchen paneling, furniture and window sills are all made of natural wood, the ladder was created in a single copy by the wood craftsman, the Chesterfield sofa and armchair, while the English-style icons upholstered in leather, and Scottish plaid on a bed near a fireplace with a burning fire; with porcelain cups on the table that remind you of traditional tea time. There’s a vinyl record player and a collection of British rock records right there in the kitchen, a mini-library consisting of English classics and books in English, from poetry from all over Britain to classical prose. Biographies of rock musicians and simply albums illustrating the life and customs of England, Scotland, Wales and Ireland are all present. Looking around at all of this diversity with an astonished look you may wonder, “Why did someone in Mama Ro have the need to select each detail so carefully for one of the studios?” 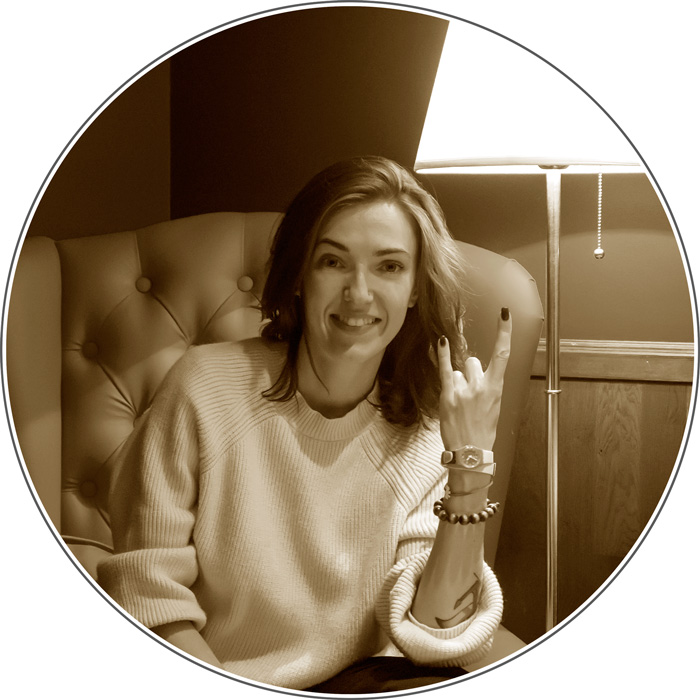 Dear ladies and gentlemen!
My name is Sasha Marusheva. Most likely, at the moment you read this message, I will already be far away, and I am unsure of whether I will be fit as a fiddle or not. But I certainly will not be here. Blow me down, it wouldn’t be a lie to tell you all about the providence that made me design the British Studio!
But first things first.

In my past life, I was a sailor who sailed on the ships leaving from the Irish ports. My life evolved, traveling across the North and Irish seas, across the Atlantic Ocean and all sorts of straits. I had nothing to complain of, I was spending all of my time on deck, and in those brief stops that we had in different harbors, you would’ve found me always in the same place: the pub. That was a long time ago!

Once I took my plane to go to London, I got to Eastbourne, sat on the top of the chalk cliff, “Seven Sisters,” and discovered a breathtaking view of the English Channel. Time slowed down, and I kept staring unable to look up from the ocean. The seagulls were flying around in circles nearby. Suddenly one of them shouted to me that everyone in the world should learn about this place, and about what I remember from my past life. I headed towards the nearest pub and began to chew her words over. That evening, I made the decision to tell everyone about my real home: England, Scotland, Wales and Northern Ireland —the four countries that, although they are different, make up a whole together.
“God save the Queen!” I exclaimed and went ahead with the creation of the British Studio.

THE MYSTERY
OF THE LOST
AUTHOR

London, Great Britain. St. Bartholomew’s Hospital. Two geniuses meet on the roof to find out which one of them will stay alive. Professional programmer and criminal Jim Moriarty arranges the meeting in such a way that his opponent’s assistant, Doctor John Watson couldn’t attend the meeting and reveal the details of the falsified suicide. After Jim’s reply, “Here is the way out! As long as I live, you can save your friends”, everything becomes clearer. Knowing that Sherlock Holmes jumps from the roof, then what happens to Jim? After his “suicide” the case is closed, no one’s looking for the body. In fact it’s just a respite and Jim’s going to lay low in hiding waiting for the moment to come. But where can Napoleon of the criminal world go? In which part of the globe can he hide, so that no one has any idea of where to look for him? The only person who knows the answer is Jefferson Hope, Moriarty’s assistant who worked in the past with programmers from Russia.

Hope comes to the idea that Moscow will be the best refuge for Moriarty. Certainly no one will find him there. So, he decides to find an old mansion there and equip a small studio for a gentleman from the UK. He would stop there indefinitely under the mask of an unknown actor Richard Brooke. Everything would be fine if it were not for the demands of Jim, a true British and connoisseur of the arts. The furnishings of the interior must comply with all the home canons of the Kingdom, so that even the stiffest guest feels at home there. Jeff Hope begins to search for a man who could organize it.

One day in Eastbourne in a small pub, Jefferson Hope meets a certain Sarah Mauzer from Moscow. During their conversation, Jeff finds out that Sarah was an Irish sailor in a past life, who knows the Kingdom as her home, and is also a professional designer from Moscow. We don’t know for certain what exactly Jeff saw that was so special about Sarah Mauzer, but what we know for sure that it was on this day that the young adventurer Sarah bartered with the British, to arrange the studio in Moscow for Hope’s client, and to adapt the alibi about the actor Richard Brooke. According to the Russian realities, so that no one suspects deception. The only thing Sarah asked for in return was to return home forever.

In a short time, Sarah came up with the studio code-named “British”. As a cover they chose a small project called “Mama Ro” situated at Chistye Prudy. They now just had to adjust the legend. Sarah went the extravagant route, which, despite the horror of Jeff, Moriarty immediately liked and approved. According to her idea, the best way to hide for Hope’s client was…to simply be visible. “They least look for somebody where no one would hide,” Sarah argued. She wrote a fanfiction for the “Mama Ro” website about Professor Moriarty trying to hide in the “British” studio under the guise of the actor Richard Brooke. And for greater absurdity, introduced her alter ego into the story under the name of the fictional Sasha Marusheva, a radio host from Moscow and a comrade-in-arms who conceals a world villain in Moscow. Professor Moriarty, secretive by nature, rubbed his palms with joy.

The only thing Sarah didn’t know for sure was the real name of the gentleman from the UK who was hiding under a pseudonym. Therefore, while working on the design of the studio, she wondered every now and then who Jeff Hope’s mystery client really was. How to furnish the studio? What style does he prefer? Since the guest’s name was kept in the strictest confidentiality, the studio eventually united both the British aristocracy and the underground cultures. There was one thing that Sarah was confident about: the British primness in the design won’t be a problem.

On the appointed day, April 19, 2019, a modest and silent gentleman came to the “British” studio, hiding his real name under the pseudonym of Richard Brooke. Sarah met him on the threshold. The gentleman looked at her for a moment. He said that he would be staying there for a long time and entered the studio, closing the door behind him. Once he found himself alone, the gentleman, without removing his coat, poured himself some tea in one of the cups that was on the table and looked around. It was evident that everything was done with care. He sat for a moment in a chair opposite the fireplace and looked at the fire. 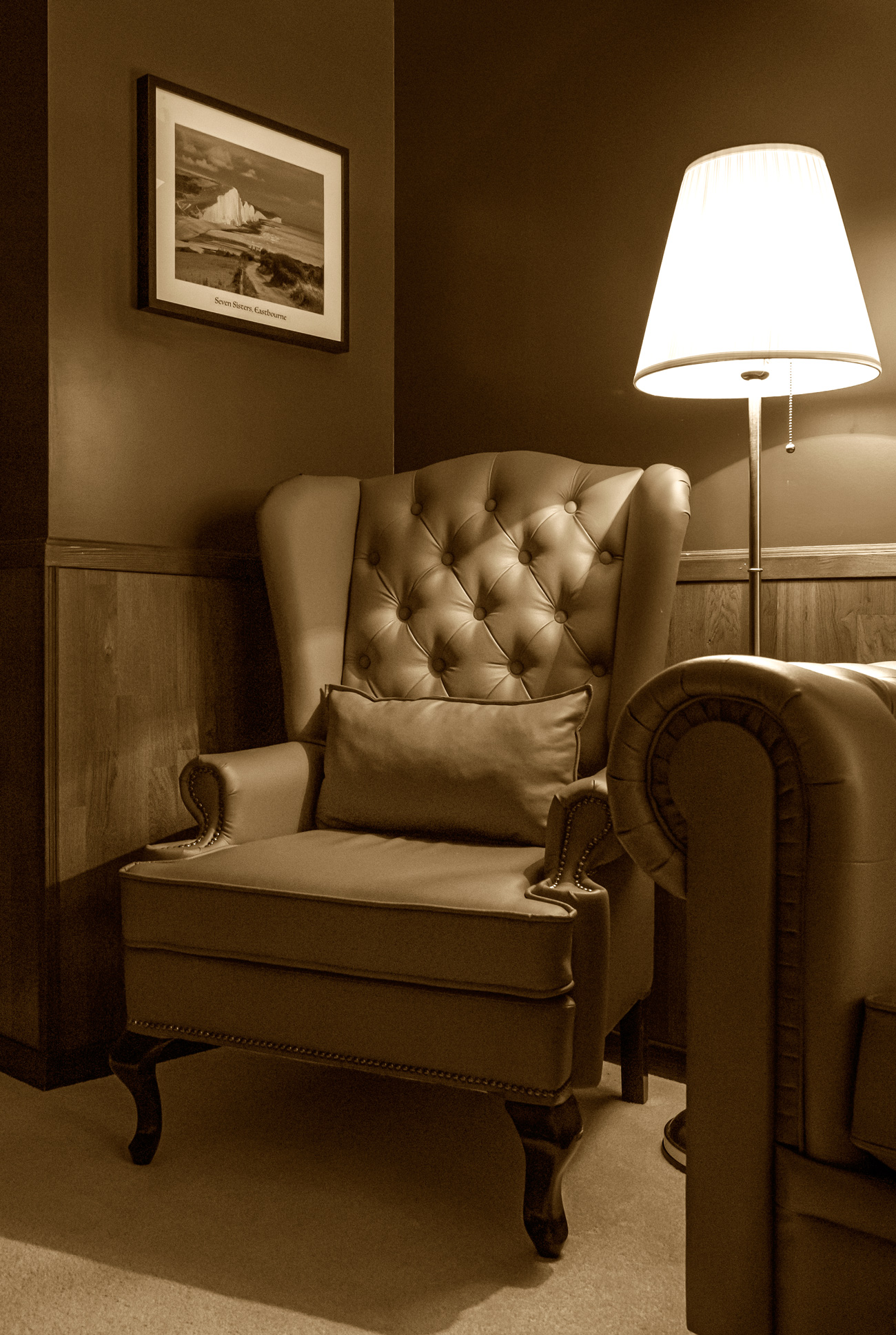 Sarah didn’t understand why Richard Brooke unexpectedly took his leave. No one even noticed how he left the studio. The cameras in the hall were working properly, but for all that time not a single living soul flashed in them. The mysterious guest seemed to disappear into thin air. Sarah entered the studio with the intention to find out the reason for his disappearance. What was wrong? Following an obscure insight, Sarah poured herself some tea in the second cup that was on the table. Then she turned around and saw everything with new eyes. There was something on the fireplace. Sarah took it and sat in the chair in which Professor Moriarty had just been sitting. In her hands she had a photo frame depicting chalk cliffs near Eastbourne (the same Eastbourne where she first met Jeff Hope).

After that day, no one else ever saw Sarah Mauzer. Just as it happened with the mysterious guests, no one saw how she left the studio. Like the last time, the cameras in the hall worked properly, but showed nothing. Sarah Mauzer seemed to disappear.

A year later, on the last page of the British The Daily Telegraph there was a strange news article about the sailors who believed to have seen a girl screaming “God save the Queen,” at night when passing by the Seven Sisters cliffs near Eastbourne. Seagulls flew around it.

Instead of an Epilogue

We found this text in the “British” studio on July 19, 2019. We publish it without any editing. By an incomprehensible coincidence, its author disappeared just like his heroes. Is it a coincidence though? Perhaps, to throw light on this strange, complicated series of disappearances is possible only for the most ingenious of the detectives on the planet. Alas, he’s only a figment of the imagination of Sir Arthur Conan Doyle.

About a smuggler’s
secret haven on a stone
island – a shelter for those
who are on the run.