How to find Mama Ro on the map
of ancient Moscow, geotags and pano-
ramas in 1695, and how Moscow peasants
invented the log-TV.

How to find Mama Ro
on the map of ancient
Moscow, geotags and
panoramas in 1695, and
how Moscow peasants
invented the log-TV.

One kind man reminded me a word, that I heard somewhere in a remote village of whether the former Zaraisky or the former Kolomna region. There, among the elderly locals, more than once I heard this word, and the word was: – We are Muscovites! And how proudly they said it, sitting on the bench at their izbas. – We are Muscovites!” — Vladimir Gilyarovsky narrates in his famous book “Moscow and Muscovites”, — “Here I am still able to work and as soon as I give all my strength to Moscow, I will leave for my homeland. There we are almost all Muscovites. This is the reason why we feel hurt, you have forgotten us. Your audience is much broader than you thought when entitling the book. They are not only those who were born in Moscow, but those whose regions give to Moscow”.

Inspired by these lines, we decided to design a studio that would help visitors remember a modern metropolis as it once was according to the famous saying: Moscow is a big village!

This is a map of Moscow in 1695. Today, when mapping services got popular, you can easily imagine: in more than 300 years – just the case of this map, – the people of the future open “The Panorama of the Past” service and walk across Moscow of our time. They walk and do not believe their eyes. Cool, right? What if something like that would be available to us today? You choose location and open, for example, a panorama of 1908. 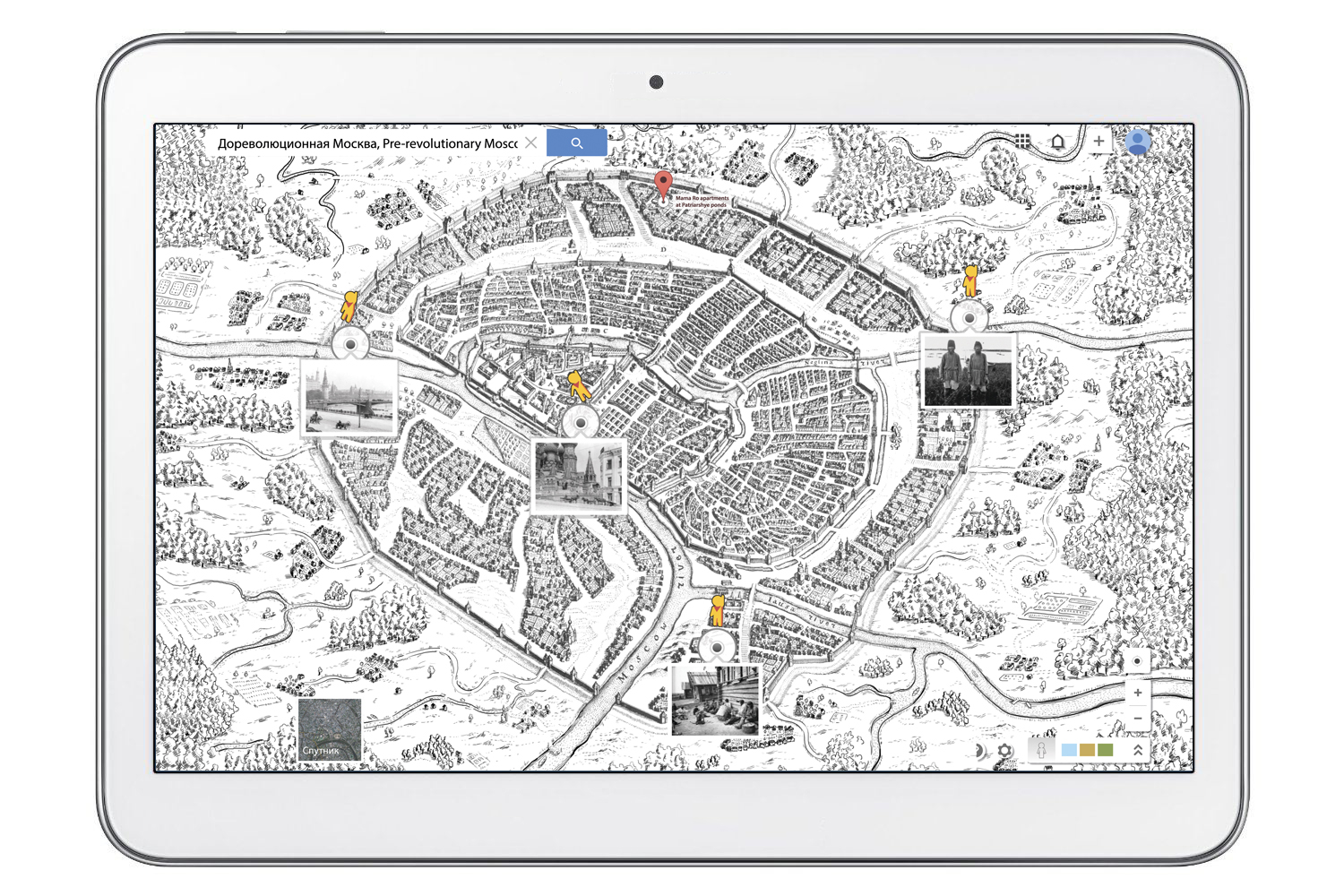 For example, the famous Moscow flood. We found this image in the Krasnogorsk archive and didn’t believe our eyes. It captures the first abatement of water after the flood – people gathered together in the street that was recently under water.

By the way, this event turned out to be really significant: similar signs have remained in Moscow to this day. The river then rose by as much as 9 meters, having flooded 16 km² of the city – 1/5 of Moscow!

Or, for example, the intersection of Bolshaya Polyanka and the Kadashevskya embankment. The Tretyakov Gallery which was nearby was nearly flooded as well and they managed to build a brickwall barrier around it.

It would be difficult to imagine the Moscow of that time if these photos hadn’t been preserved, right? A modern metropolis that looks like a big village in the photos perhaps even more than in the memories of Gilyarovsky. 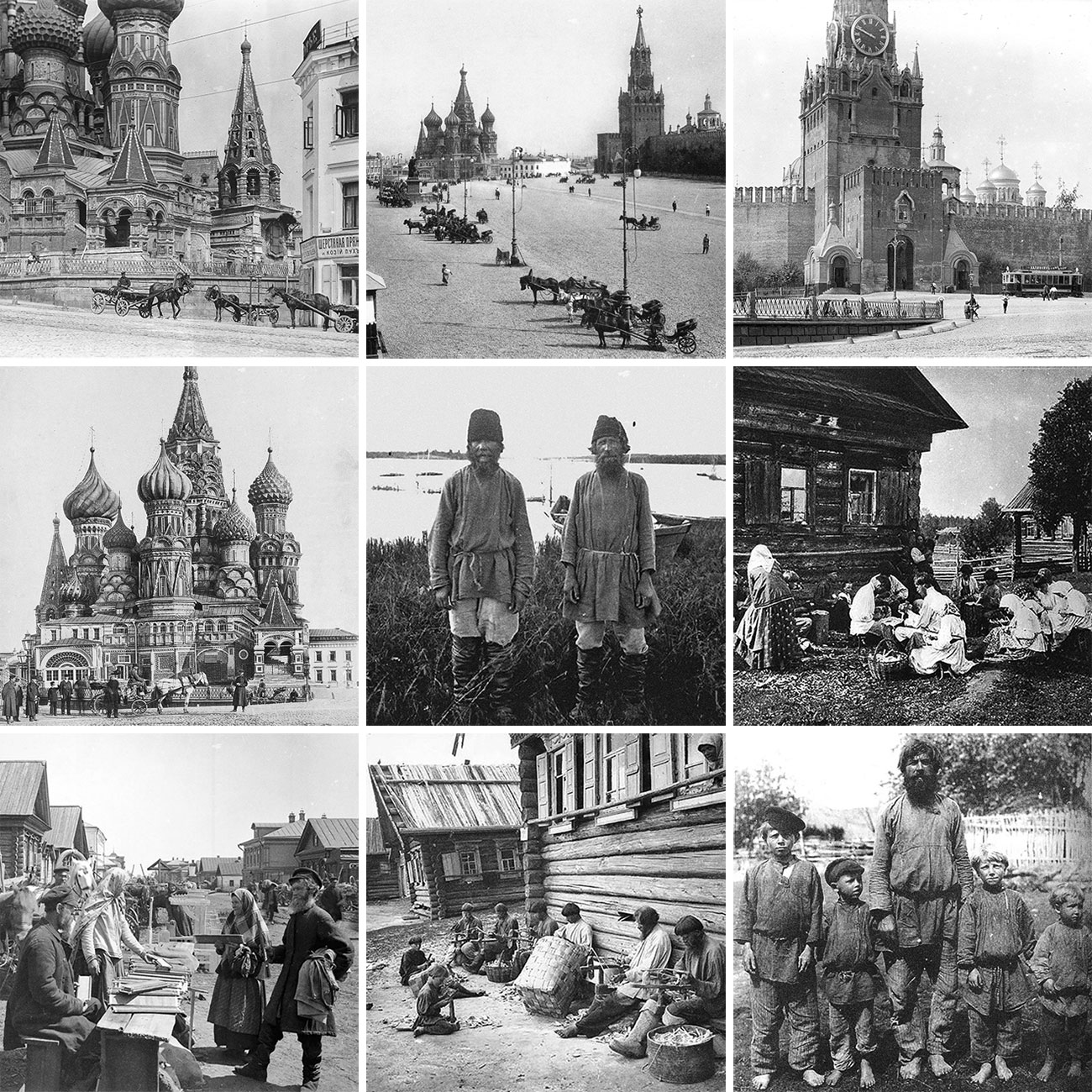 But let’s get back to the ancient map. What do the mapping services and the Moscow studio have in common? At a certain moment, we suddenly realized that there is a point on the map where Mama Ro is located today. If the time-lapse with a possibility of shooting films of millennium long existed, the era would have swept like a whirlwind, but this geotag would exist along with the city every fraction of a second in this spectacular video. And in this sense, having tagged the location and felt the real – not virtual – participation of history in this city, we could only create a panorama in which you could go into its past. So we did. 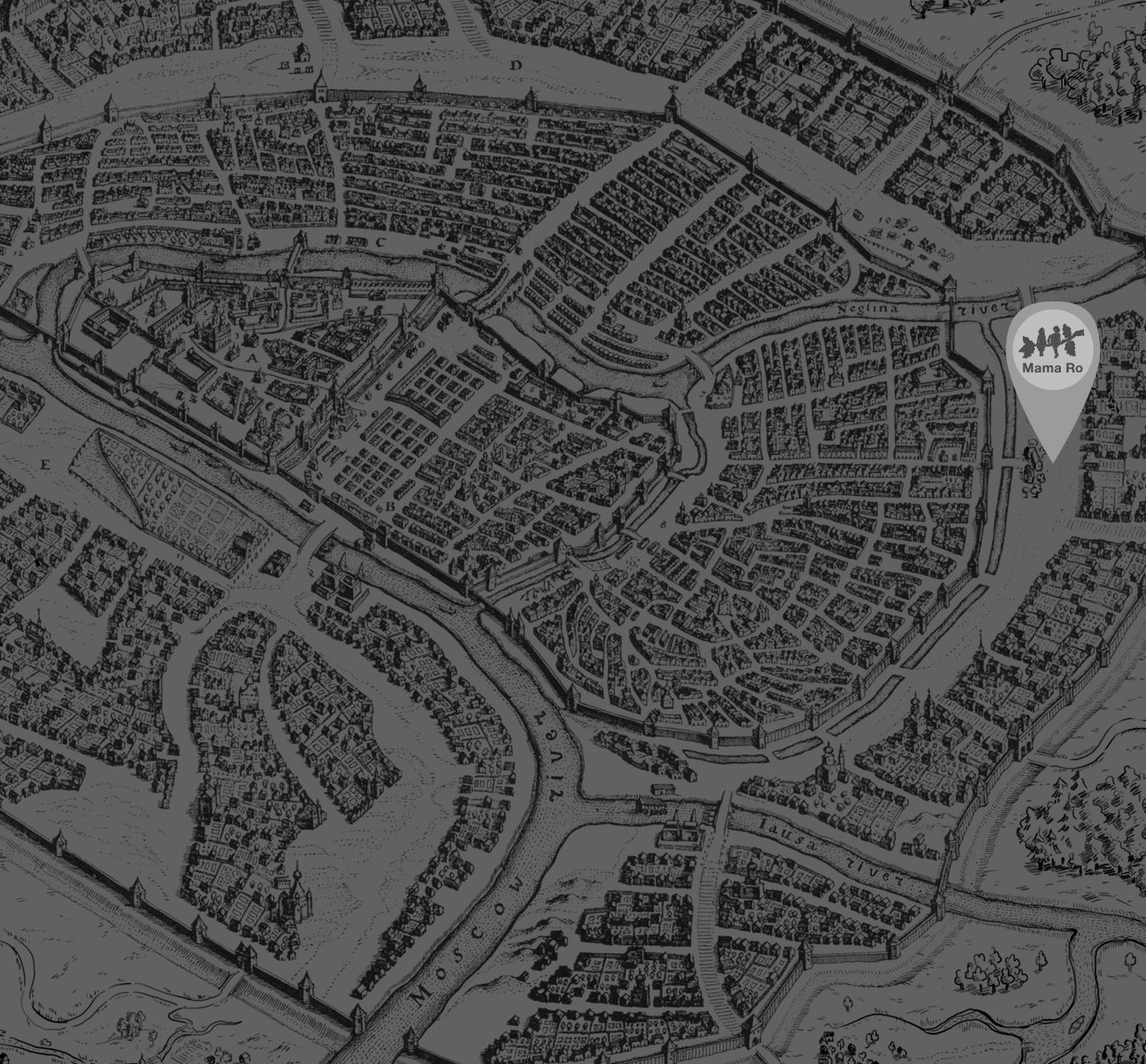 Two and a half centuries ago, the wall of Bely Gorod (The White Town) was lying under the windows of the Moscow studio. It was a fortress ring, the third in a row after the Kremlin and Kitai-Gorod. Under the walls of Bely Gorod was a moat with water, and on the square right in front of the metro entrance where taxis are usually parked today were the Myasnitskie gates (Buthers’ gates). Next to them, in the 17th century, was a meat market called “The Cow ground,” known all over Moscow. Right on its place – under the walls of the former Bely Gorod – Mama Ro is situated today.

We created this panorama of dozens of vintage photos and text plaques and wrapped them along the walls of the interior. Its particular feature is that the panorama starts right from the geotag of Mama Ro and goes up to the Kremlin walls and beyond – so that when you are getting out of the studio, you have an interesting opportunity to immediately compare it with the current appearance of the city. 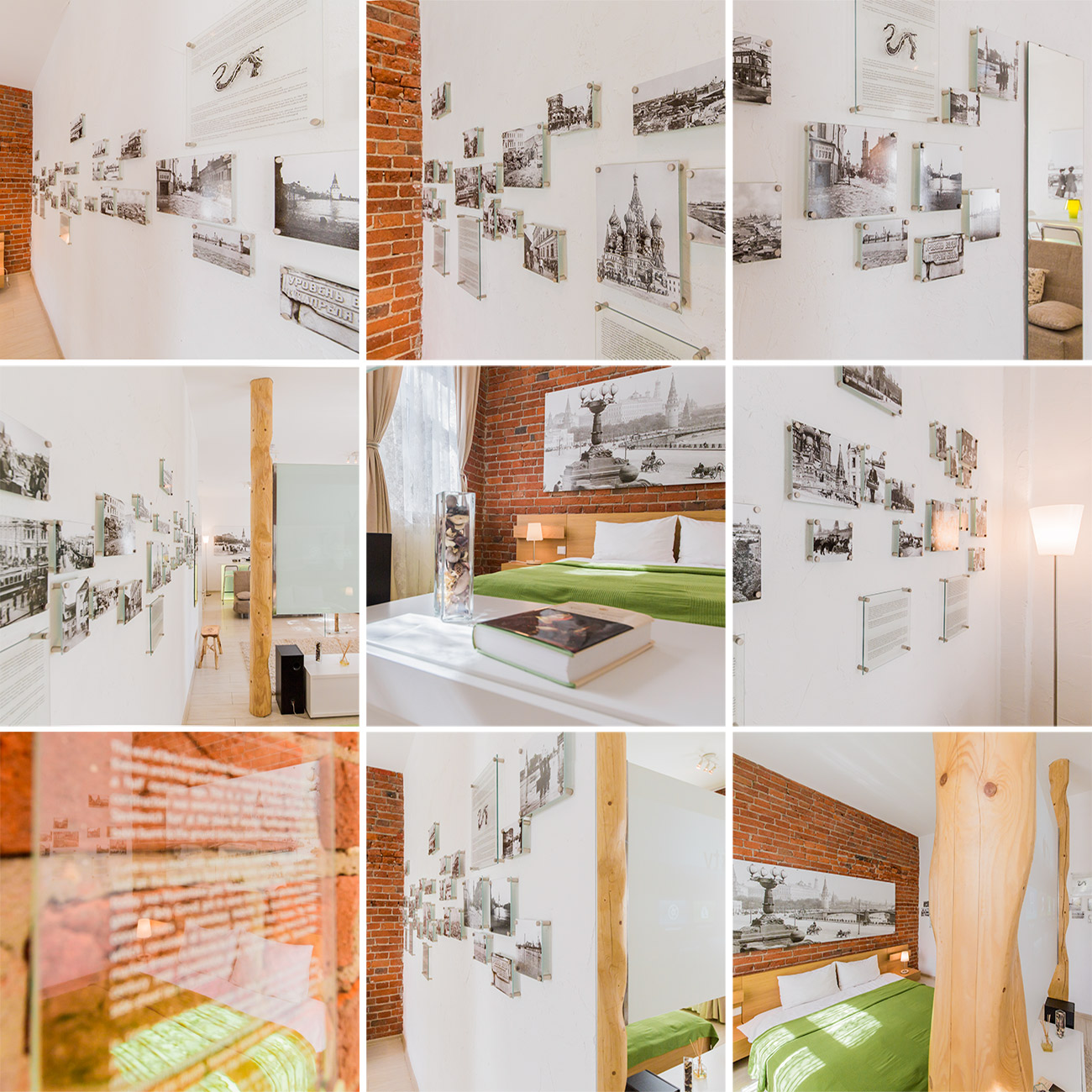 Welcome to the studio in the middle of the big village. By the way, the “log-TV” in the studio is a truly rustic invention. The peasants of Tsarist Russia came up with the device in the early days of cinematography. During the summer nights, they stretched a rag between two logs vertically placed in the house in thrust or outside between birch trees, installed projector and the whole village was gathering to watch “moving pictures of Tsar Nicholas”. We borrowed this know-how, improved it and transformed into a double-sided screen by replacing the rag with glass.

The story of the author’s studio is about
how easy it is to cut a tree, it’s about
how the search for meaning is correlated
with climbing up trees and what it’s like
to get lost in three pines.

The story of the author’s
studio is about how easy
it is to cut a tree, it’s about
how the search for meaning
is correlated with climbing
up trees and what it’s like
to get lost in three pines.