The story of the author of the studio about
the way river rafting changes your lifestyle, how
the hatchback Honda Civic became the studio's
mascot, and what street art has to do with it.

The story
of the author
of the studio about
the way river rafting
changes your lifestyle,
how the hatchback Honda
Civic became the studio's
mascot, and what street
art has to do with it.

When creating the “Extreme” studio, on the one hand, we wanted to emphasize the philosophical value of the movement itself (it’s not by chance that the ramp is closed in a ring symbolizing infinity), and on the other, to inspire the guests to go to the real rings of Moscow: which are the alleys and boulevards equipped for active leisure time. The text below is about the creation of the most “active” studio of Mama Ro. 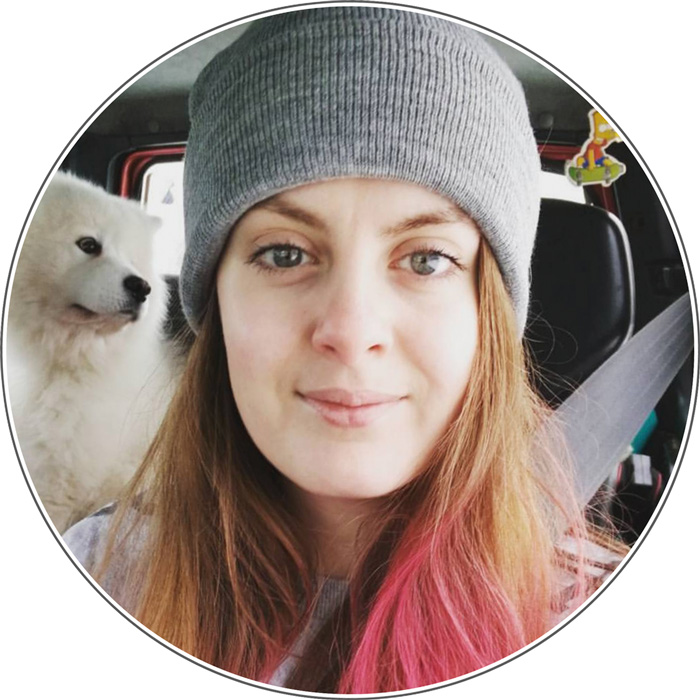 Hello, my name is Anya, and I’m the  author of the “Extreme” studio. On this  page I`ll tell you how this interior appeared,  and why there are bicycles and skates  on its ceiling.

Once I was invited for a catamaran river rafting. I had the role of the rower. We rafted all day and along the way we had to pass over a few quite difficult sections. It was either sunny or raining. By the end of the rafting, I was completely soaked. And even though I had a great deal of euphoric emotions, my whole body ached with fatigue. 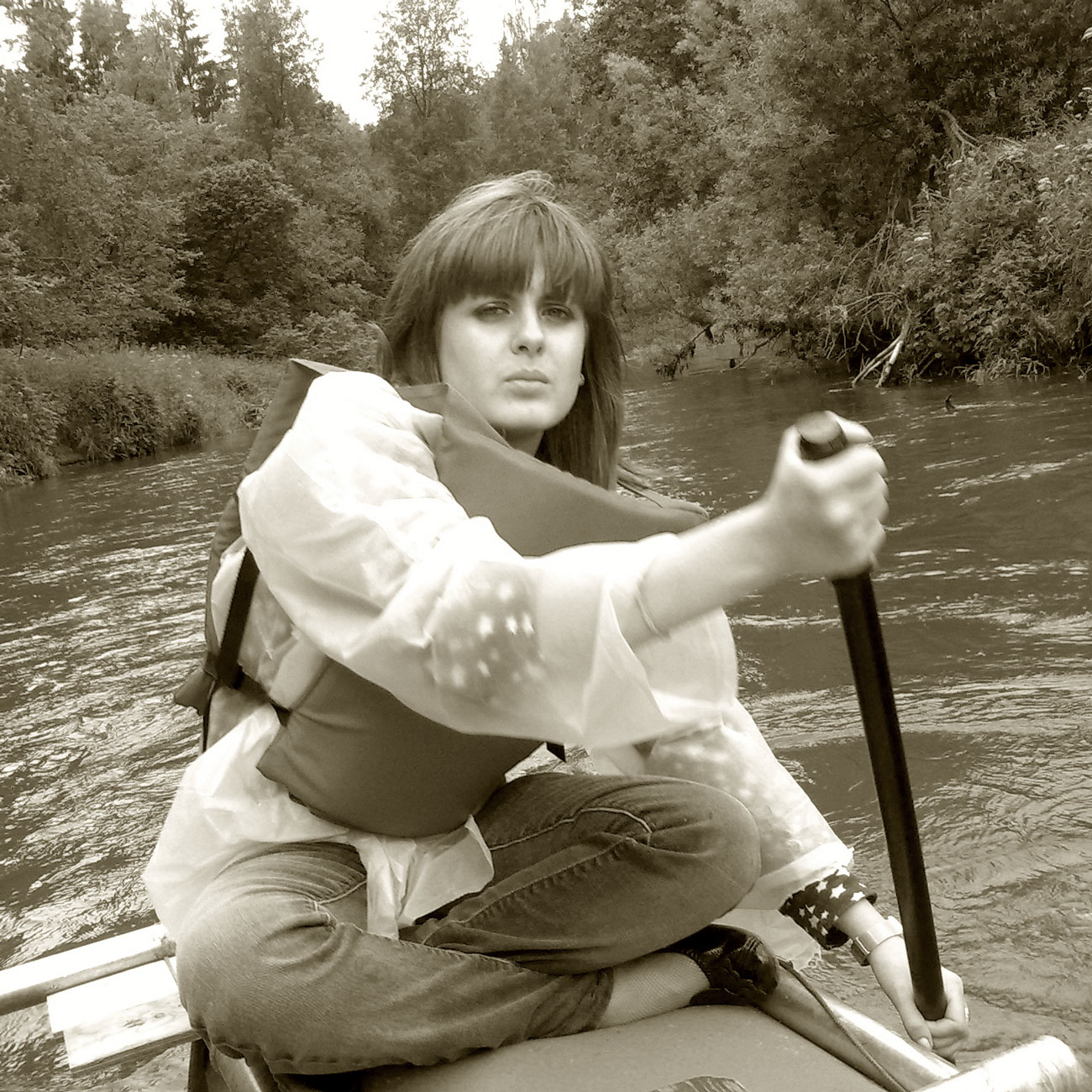 Falling into sleep, I thought that I was so tired that I‘d need to recover for a long time, and that I’d also get sick and have to sleep all day. But the next morning, to my surprise, I woke up before everyone else, and I had even more strength and energy than I did during the previous days.

It was then that I realized for the first time that movement is really life. Ever since, sports and extreme sports have become a part of my life. A part that I want to share with you through the design of the Extreme Studio.

The average life of a skateboard is a year or two. Sometimes, with active use, the skateboard doesn’t even withstand a season. But its idea is movement, and sports have no deadlines. After deciding to transform the space into a ramp, I began to reflect on how I could illustrate this. I then suddenly saw my old boyfriend’s BMX. This bike came with him from his home town Vladivostok, it rode through all of the streets there, traveled to Magadan. And it’s here. By that time, Dima basically didn’t use it anymore. And so, the idea came to me: to hang it right in the studio. And wrap the ramp around it. The bike was quite outdated already and seemed too heavy to me. However, its faithful service deserved honor. Everything came together; skateboards, bicycles, and snowboards come to their end of use, but the movement that they were created for continues. I came up with the “endless ramp.” Dima’s bike took the place of honor in the “Extreme” studio. Following this, with the help of our friends, we managed to assemble an entire installation from snowboards and skateboards, continuing their endless movement, each with its own real story.

Through my eyes, street sports are inseparably linked with street art. It would be unthinkable to present the “Extreme” studio without paying tribute to the art, so inextricably linked with the run (and more precisely, with the chase). I turned for help to the talented artist Pasha Kontsevich. 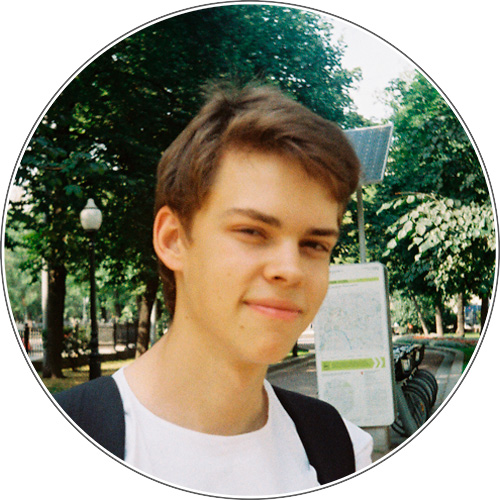 “If you think about how limitless the possibilities of the human body are, you get amazed that you can also do all this! The design of the “Extreme” studio is an ode to the flexibility and physical abilities of the human body. Each wall here displays one of the sports that are close to both Anya the designer and me. The canvases hanging within the frameworks depict the sports that the studio guests can do during their stay in Moscow as well as the urban locations typical to each of them.”

Of course, we should explain to the people who are here in Moscow for the first time what exactly Pasha meant by “typical locations”.

Gorky Park, near the Moscow River, a meeting place for cycling lovers, as well as roller skating and skating, and ice skating in the winter. The typical silhouette of the Krymsky or Crimean bridge in the background helps you find it. The entire embankment is at your disposal. 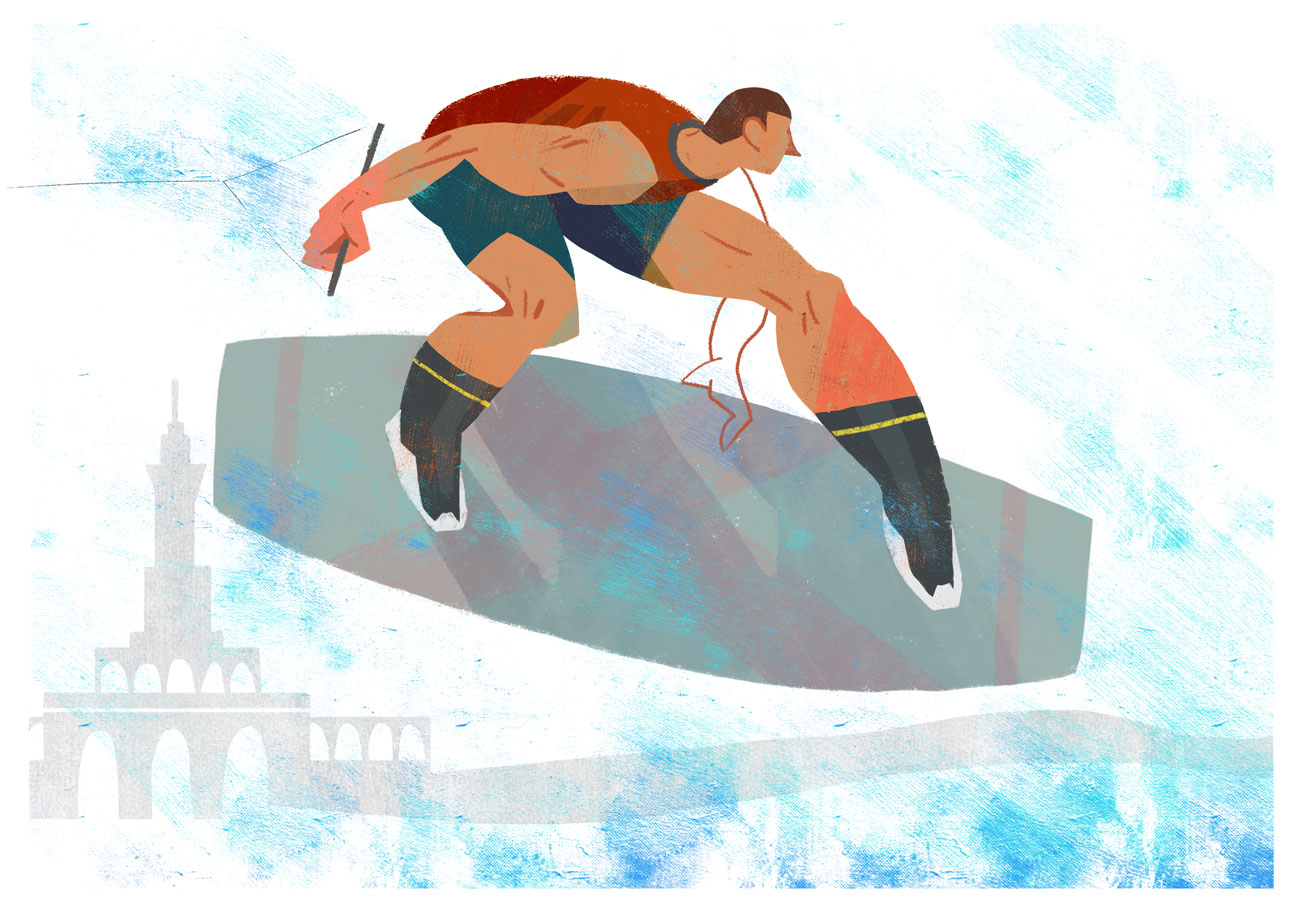 There’s Moscow Wake Park on the Moscow River in Northern Tushino area, a meeting place for all lovers of wakeboard. The typical silhouette of the River Terminal in the background will be your reference point to be sure that you’ve found the right place. Moscow river is at your fingertips. 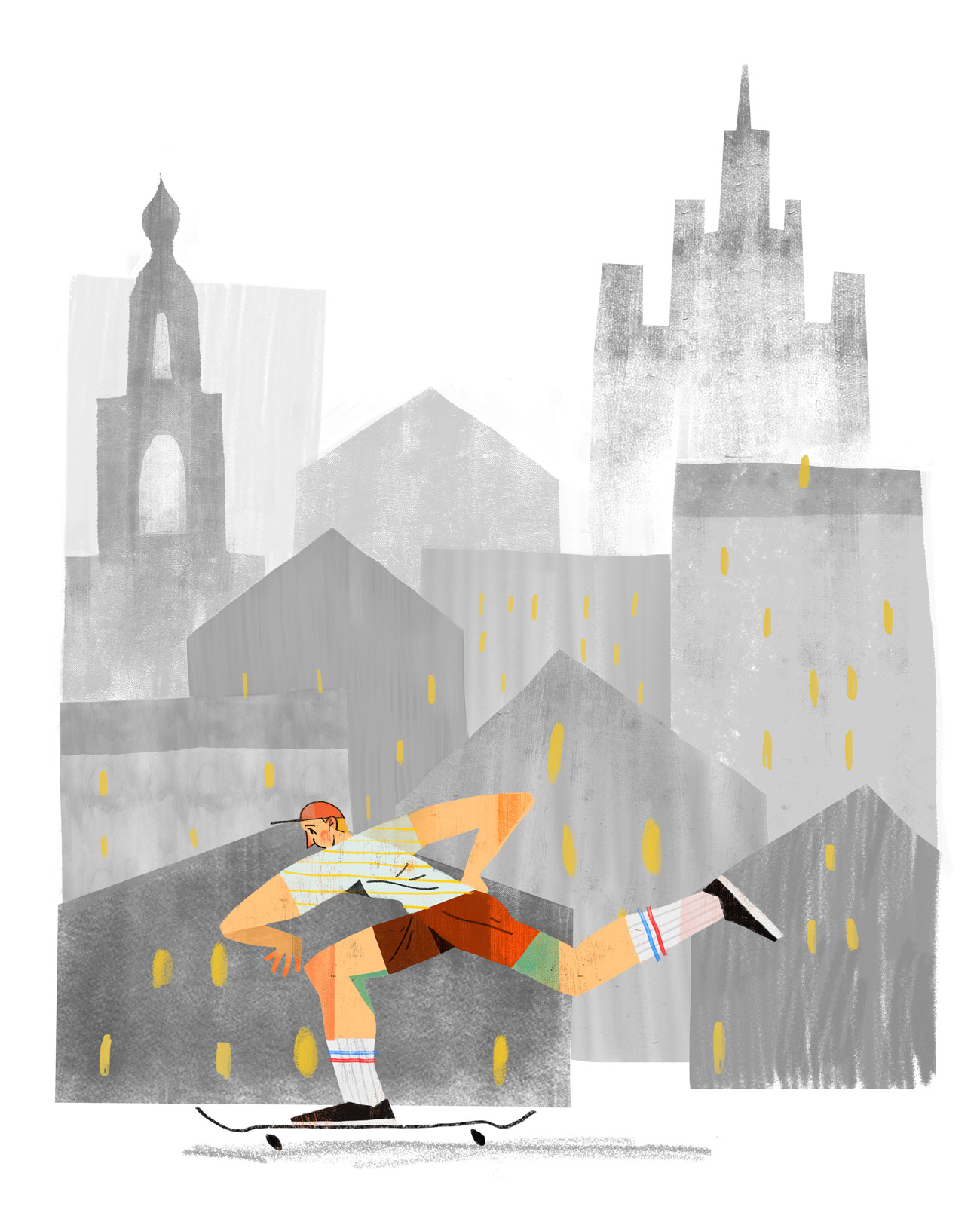 New Arbat Avenue, is a meeting place for skateboarders (when it’s a skating season they install a ramp here). The typical spire of the Foreign Ministry building in the background is your guide. One of the main arteries of the capital is at your disposal. 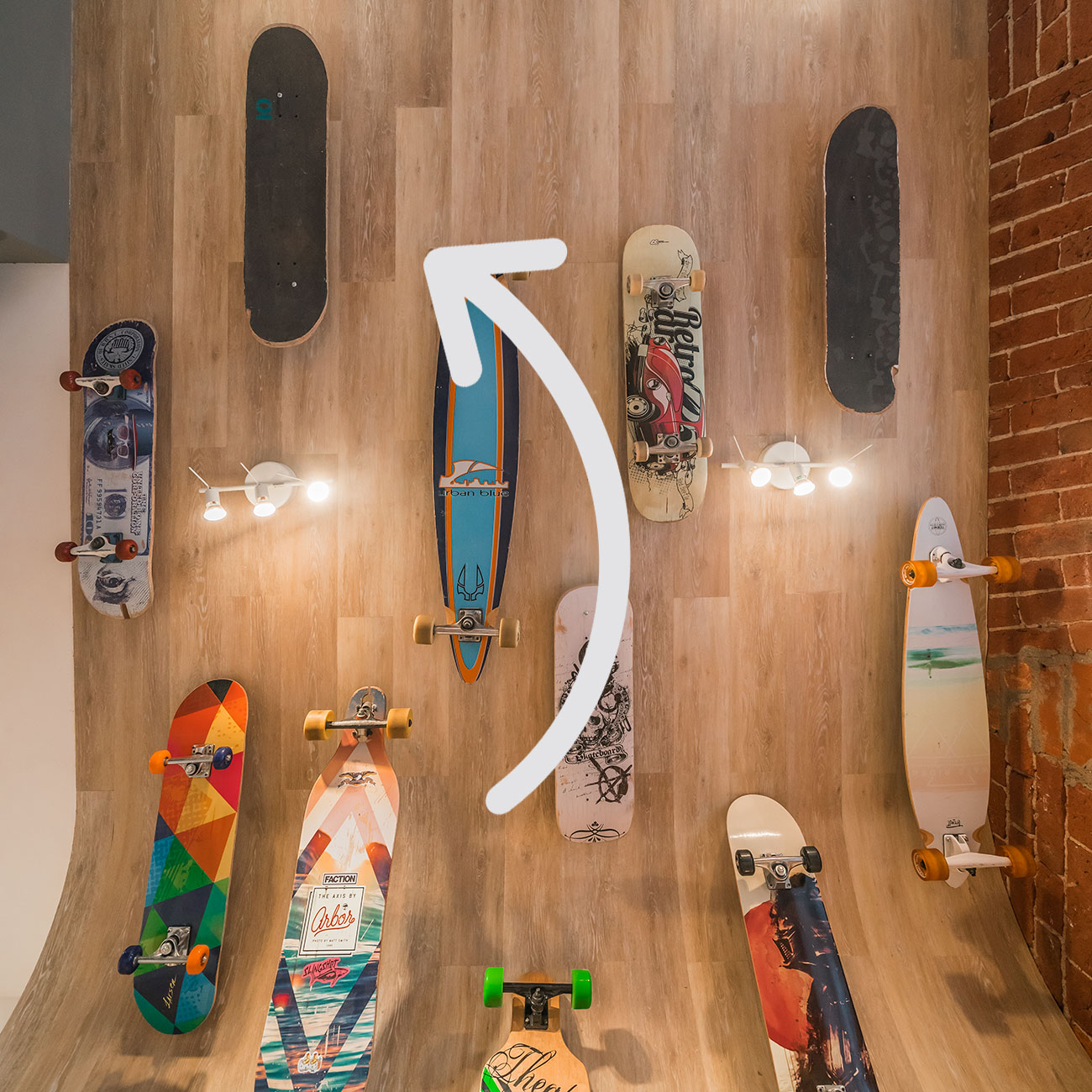 Oh, by the way! Having found about the idea of the endless ramp, Pasha sacrificed his skateboard that was with him from a “ridiculous click” on asphalt to his first serious trick. Pasha rode on this board when it was negative twenty-degree Celsius in the very heart of Siberia, Krasnoyarsk. Under the railway trails serving as a shelter from the snowfall… isn’t this the spirit of extreme?! Now this skateboard is part of the installation.

Finishing the studio, I chose the Honda Civic EF model as its mascot. This is the legend of Kanjo. For those who aren’t aware, this is how the Japanese call the circular system of roads and junctions in the city of Osaka (something like the Third Ring Road in Moscow). The fact is that the eighties of the last century were the golden era of Japanese engineering, and along with this, illegal street races were actively developing in Japan. Honda Civic turned out to be a small, powerful and brisk car which was perfect for “drifting” in the stream, and very quickly it became a legend of extreme street racing. I thought that this was the best talisman that I could find for the “Extreme” studio. 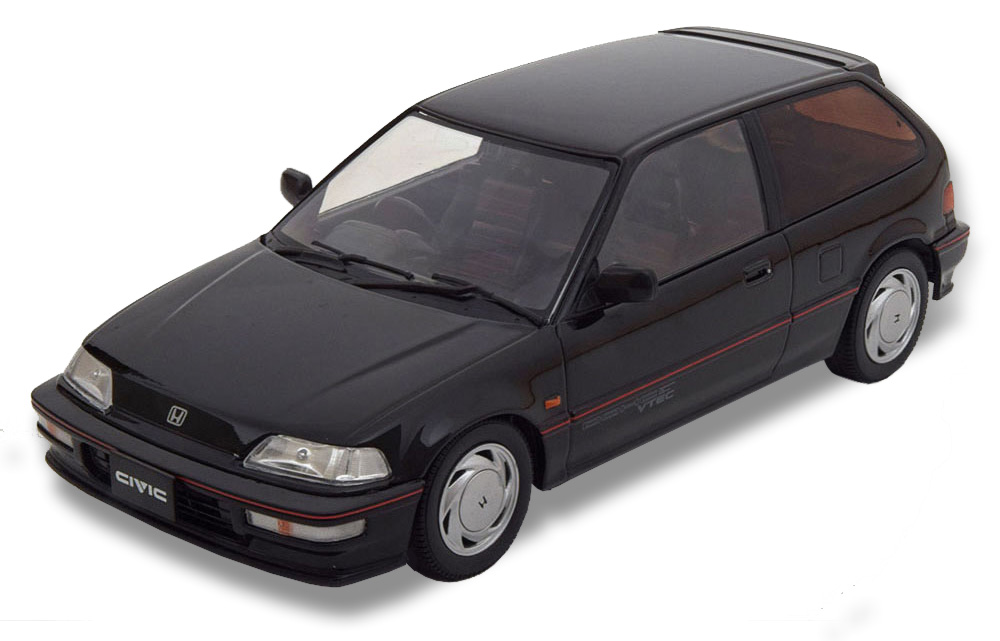 And, finally, it seemed important to me to not only to share my experience, but also to give anyone who wants it, the opportunity to join the megalopolis movement through sport. That is why there are two skateboards in the studio that guests can use absolutely for free. Welcome to the world of extreme sports! 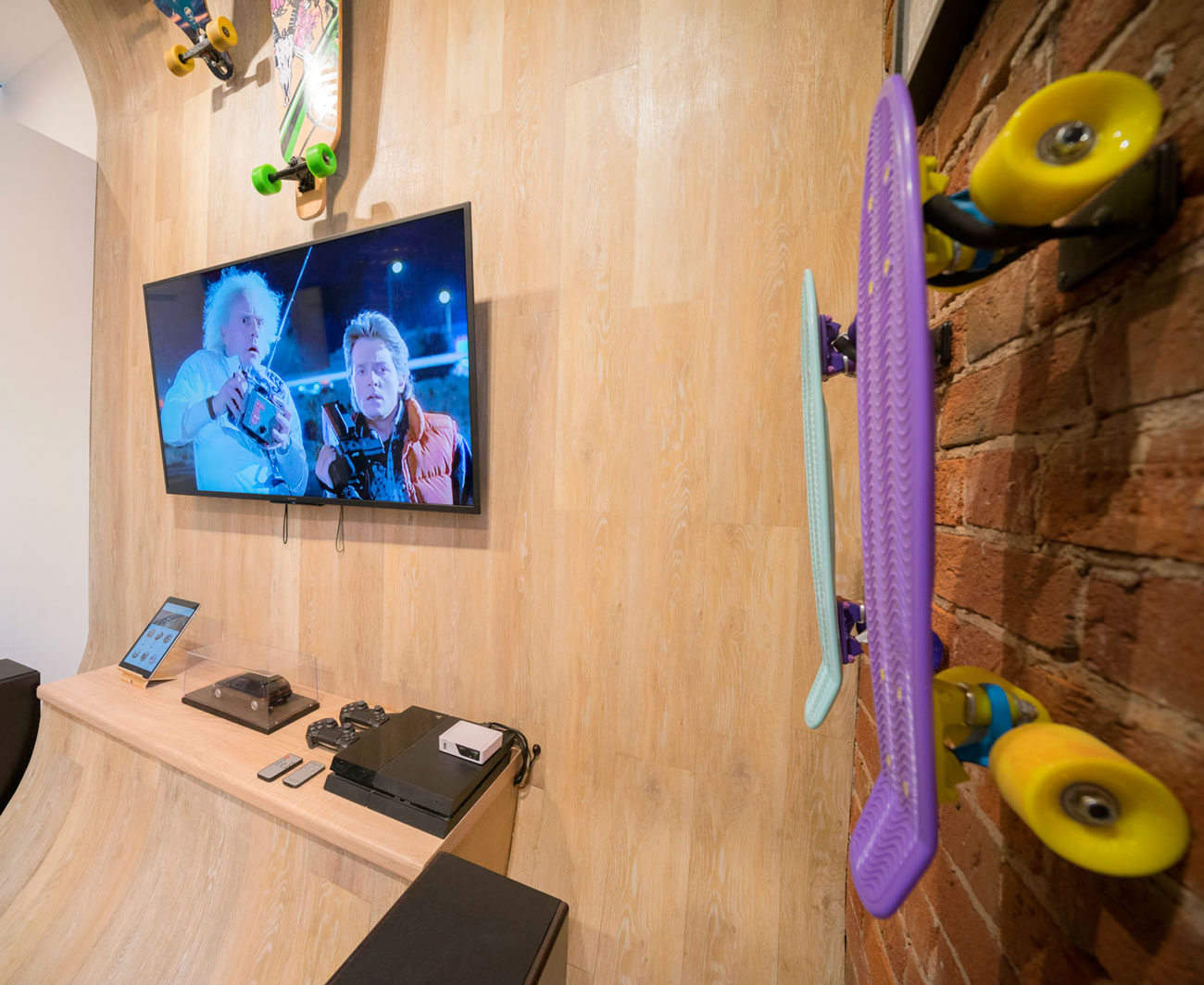 Mystery of
the Missing
Author

The story of the author
of the studio that tells why
you should sit here by the
fireplace, drink English tea
and dive into the universe
of Sir Arthur Conan Doyle.