The Chinese studio is for
contemplators and those who
want to make a trip to ancient
China without leaving the
studio.

In serene weather, having climbed the mountain behind my hut, I created myself a pole seat at the crown of a pine tree, cover it with straw and look round the vicinity from my monkey nest. I would not say that Sutsuanya’s nest at the apple tree or the grass shelter Vana built on the top of the mountain Chubo had inspired me for this fun. I have simply become a sleepy mountain hermit: I sit stretched out with my legs on the mountain steep and fish out lice to pass the time. Sometimes I go down the ravine, scoop up clear water from a spring and cook food for myself. I live very modestly, listen to silence – rarely a still tap of drops disturbs it”.

This is from the travel diary of 1690 of the Japanese poet Matsuo Basho. In all ages people have and will long the climb of a beautiful branch on a tree, a hillside, or a sharp edge of a steep cliff. There is something childish in the huge variety of decking knocked together near the water’s flow, that strings the bridges between the mountains, walkways and viewing platforms near the pine trees with mountain views – all the things that oriental art (the Chinese scrolls) are rich with. The studio began with the idea that anyone, regardless of age, like the ancient Japanese and Chinese travelers, would be interested to climb up to a new level in the studio and explore “the neighborhood” from there. Together with a bunch of other the eastern stories, we immediately remembered the wonderful Chinese scroll of the second half of the 18th century…

The large bamboo platform measuring at four by three meters, with a tatami mat surrounded by rice paper lamps and good literature are the main accents of the “Chinese” studio. We wanted to create some kind of a rest point in the 16-meter lengthwise interior, which would be a distraction from the bustle, so you could give yourself up to flipping through albums and watching a movie or simply “listen to silence” as Matsuo Basho once did in his “monkey nest”. 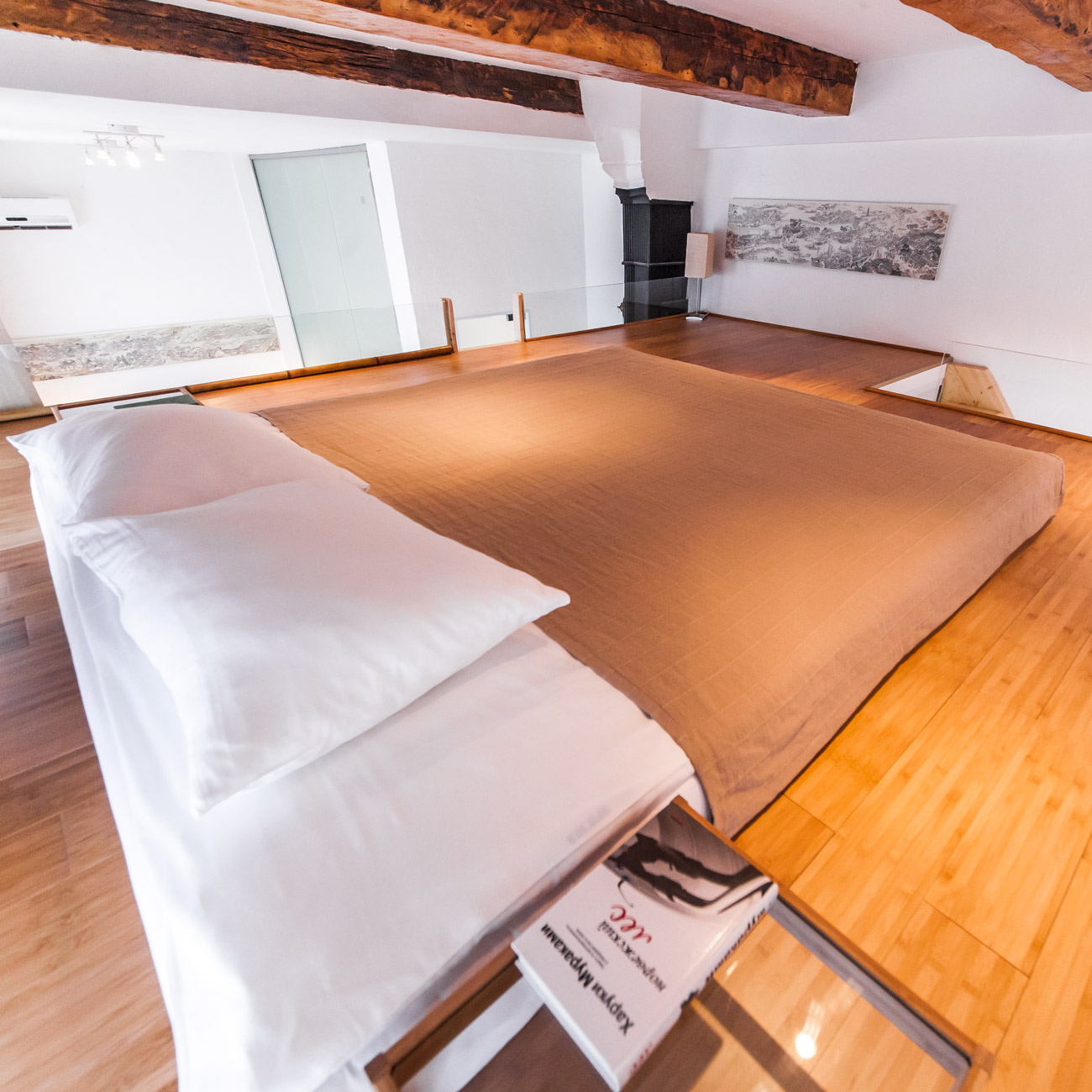 There, now you have an overview of everything so you can imagine it as if you were on the same real platform built in the open space of forests and mountains. You have the ground floor on one side – a bedroom, on the other – a living room, on the third – a view on the asphalt of the Moscow courtyard from the third floor of the mansion. And, of course, the sky above it. There are two ways to the platform: oblique and vertical ladders from different sides. It is not by mere chance (besides the association with the East) that the platform has another not immediately clear meaning: a journey…

…we associated this scroll with a journey. The fact is that since ancient times these scrolls in China have been a mix of paintings and diaries: the artist when going on a journey remembered in detail everything he saw and then expressed it on the scroll as a coherent narrative of his journey. Therefore, passing along this scroll from right to left – the order of “writing down” the impressions – you can relive the entire journey once made by these travelers. Moreover, since a scroll length was several meters long, people could examine even the smallest pieces for a very long time, so it gives the impression that a scroll was stretched in time just like a real journey! 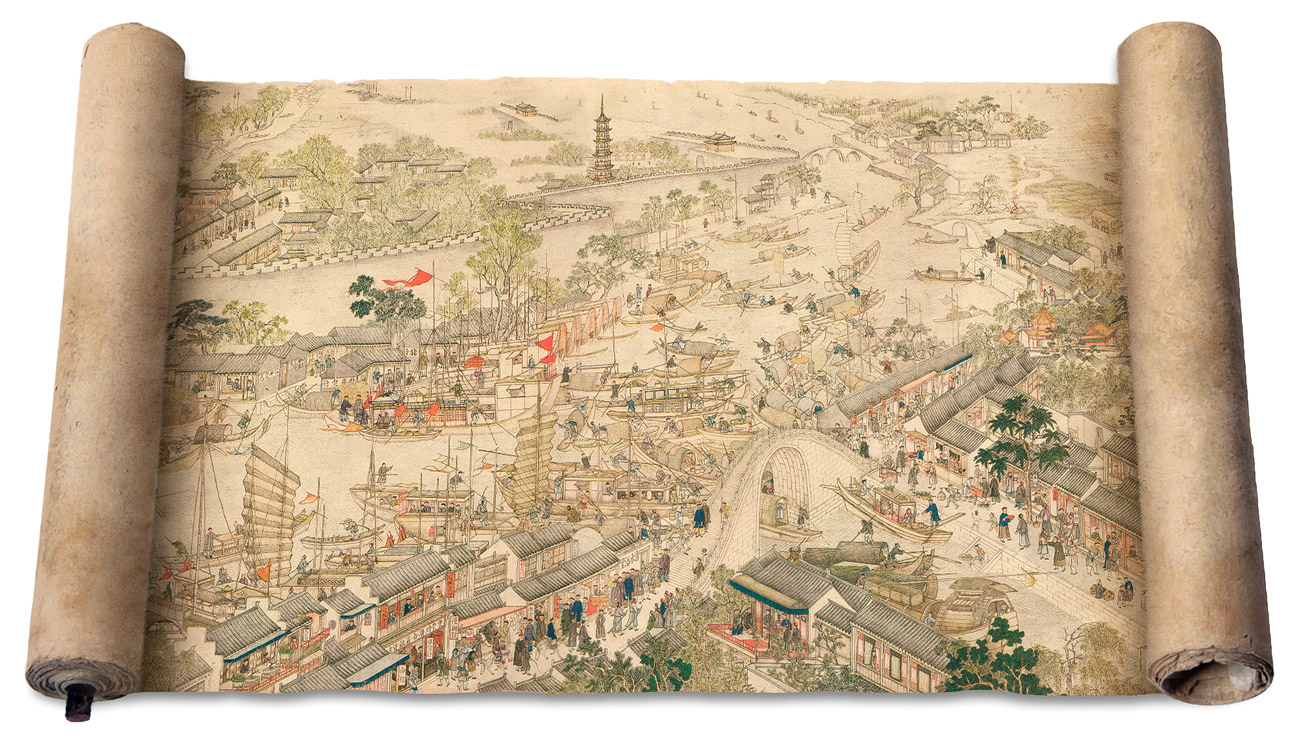 This is why the “Chinese” studio is encircled with a scroll. We can be moving along it, and then climb up the platform for a stop and suddenly the scroll divides into successive pieces placed in order on the interior perimeter – and then goes back down to continue the journey. You can truly make a trip through Ancient China without leaving the studio. In this atmosphere, the bamboo platform is truly a place of rest for a traveler. And the traveler is everyone who looks for the details in all the splendor of nature and urban life. 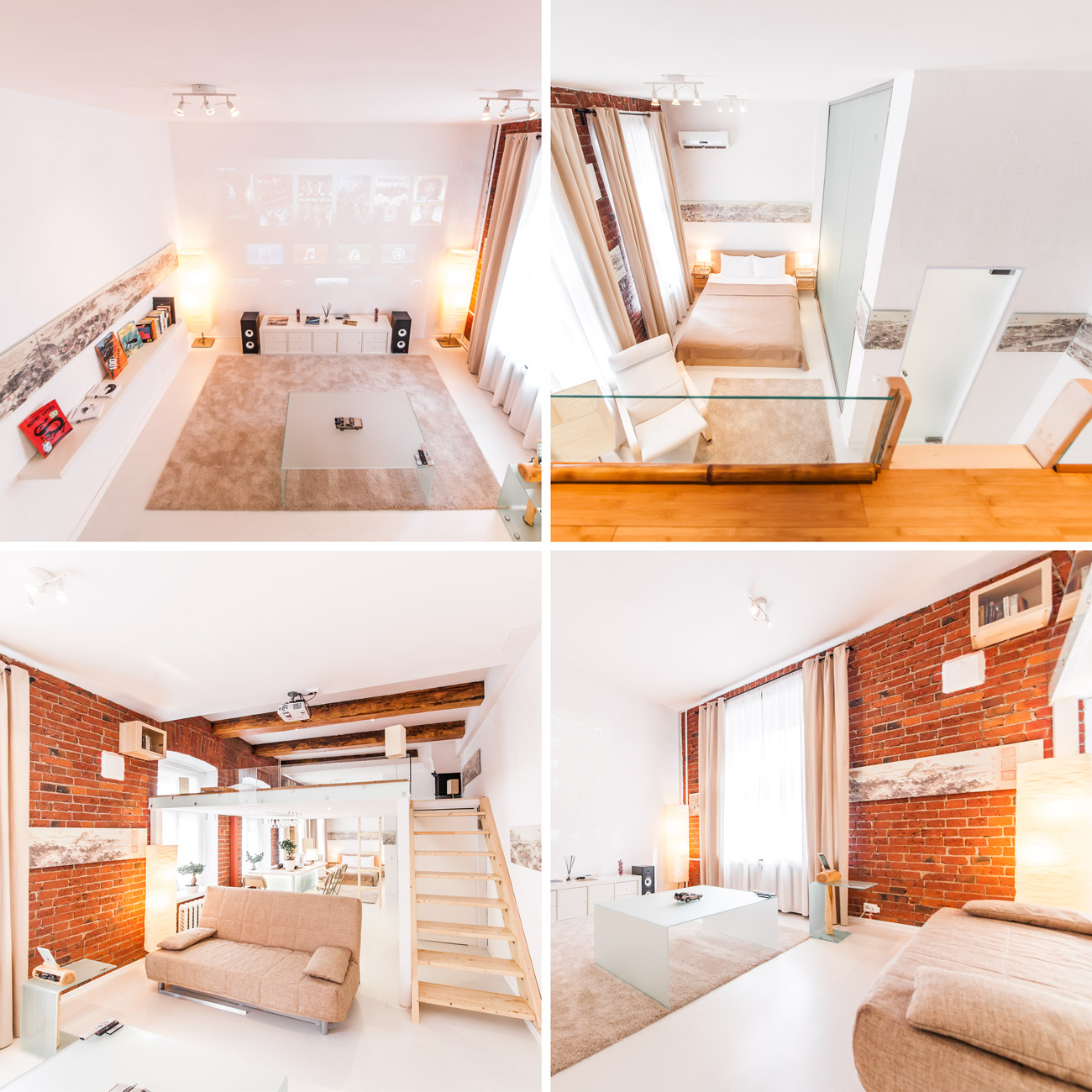 Give it a try! In the picture below we put the tools which you can use to travel along the scroll. Start the journey from right to left – as it was originally intended by the author – and zoom in for the fragments which seem interesting to you. When you want to relax, come to Mama Ro. We have the bamboo platform in the “Chinese” studio specially made for such occasions.

P.S.: During the creation of the scroll for the studio we used the highest quality printing to ensure that guests would not miss any detail. They say the master used a brush thickness of just one hair in some parts of the scroll. Even when the Emperor of China saw the painting, he examined every detail for a long time not being able to stop staring at it like a kid. We hope you will be impressed too!

Engine-Driver
in Love, or
the First Street
Art in the USSR

The way love overcomes obstacles,
the story of a hijacked train
and the appearance of the first
street art in the Soviet Union.

The way love overcomes
obstacles, the story
of a hijacked train and
the appearance of the
first street art in
the Soviet Union. 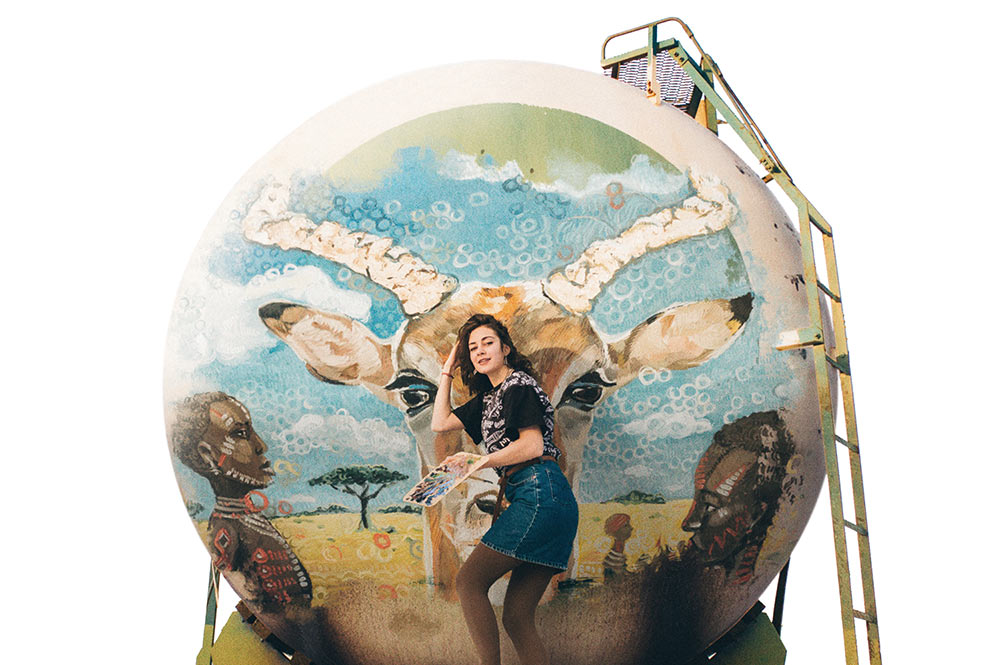