The reason why ugly studios,
just like planes, do not fly, the
flight on the Jumbo Jet and the
sweet dreams in Avia studio.

The reason why ugly
studios, just like planes,
do not fly, the flight on the
Jumbo Jet and the sweet
dreams in Avia studio.

The “Avia” studio is one of the smallest studios in Mama Ro. When we were working on the idea of its design, somebody suggested that the small space of the studio should be used as ergonomically as it is done in Boeing. As a result, we got obsessed with “airplane” fancies which led us to creating the studio with the wing of the Ro-19 airplane…

The Cockpit of Jumbo Jet

The story begins with the”Jumbo Jet” cockpit from the double-deck Boeing 747. Later, we had to come up with the studio design but at that moment, having done the first comparison with Boeing, our only thought was to rise up in the air on the craft and shoot for a cockpit panel in the future studio. And so we did. 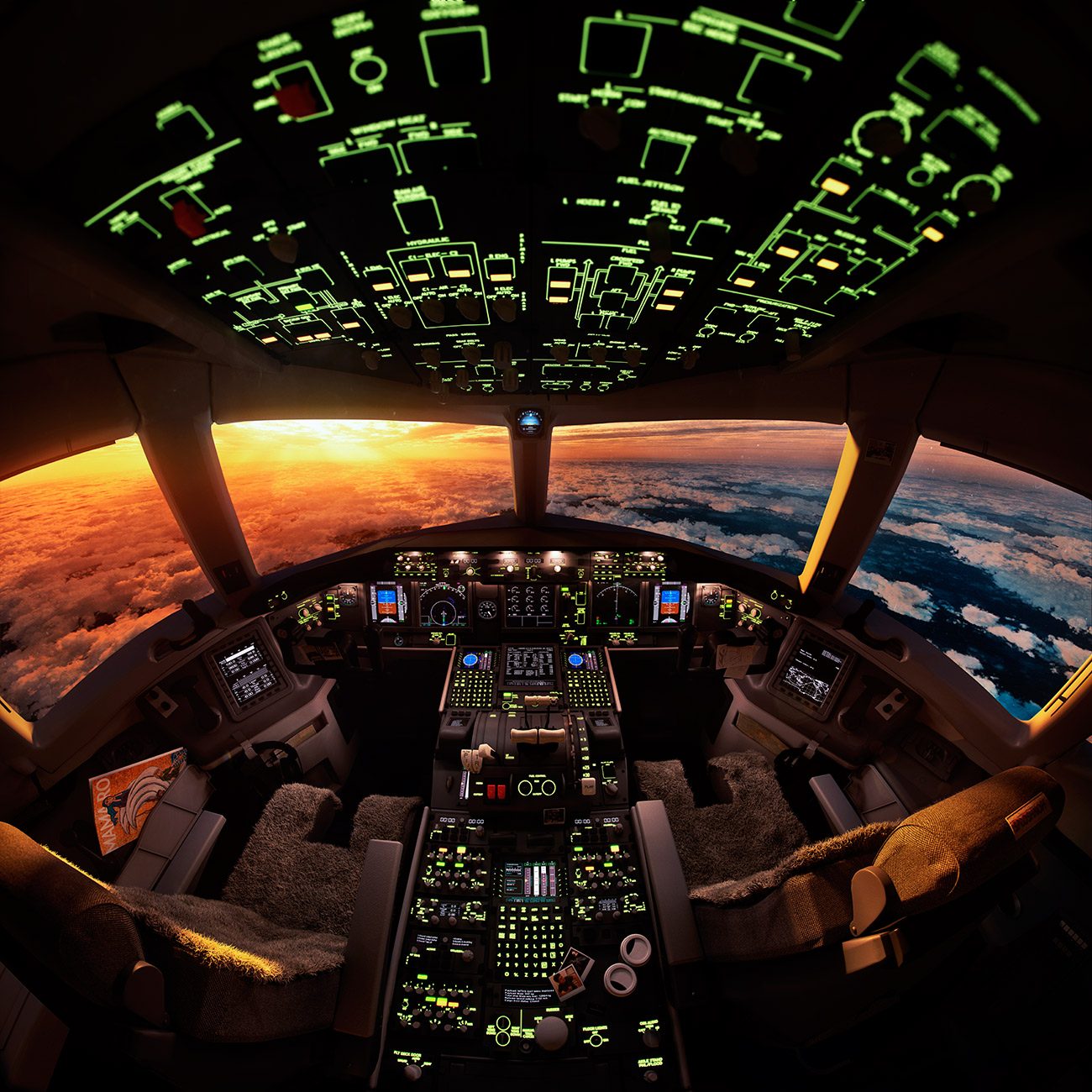 One of the founders of Mama Ro had rented for few years an apartment of the pilot of Civil Airlines flying the Boeing 747. When we were working on the design of the studio, we called him to share our idea which turned out to be feasible. We bought tickets for the flight and an “after take-off shot” in the cockpit. The use of Photoshop in the final retouching was due to their technical rules: while flying one of the pilots must stay in the seat. In addition, for better and even study of all the details of the dashboard and clouds outside we glued several shots with different exposures taken with high-speed shooting with the “Fisheye” lens which made the photo more natural as if you were inside the cabin.

At the same time we were working on the first sketches of the future interior design. Our attention was drawn to the second deck: if the studio has a cabin of the aircraft, it at least needs wings, a tail number, as well as a fuel tank, and instructions on how to refuel it. So, we constructed a second storey so that in this way it associatively resembled an aircraft wing. 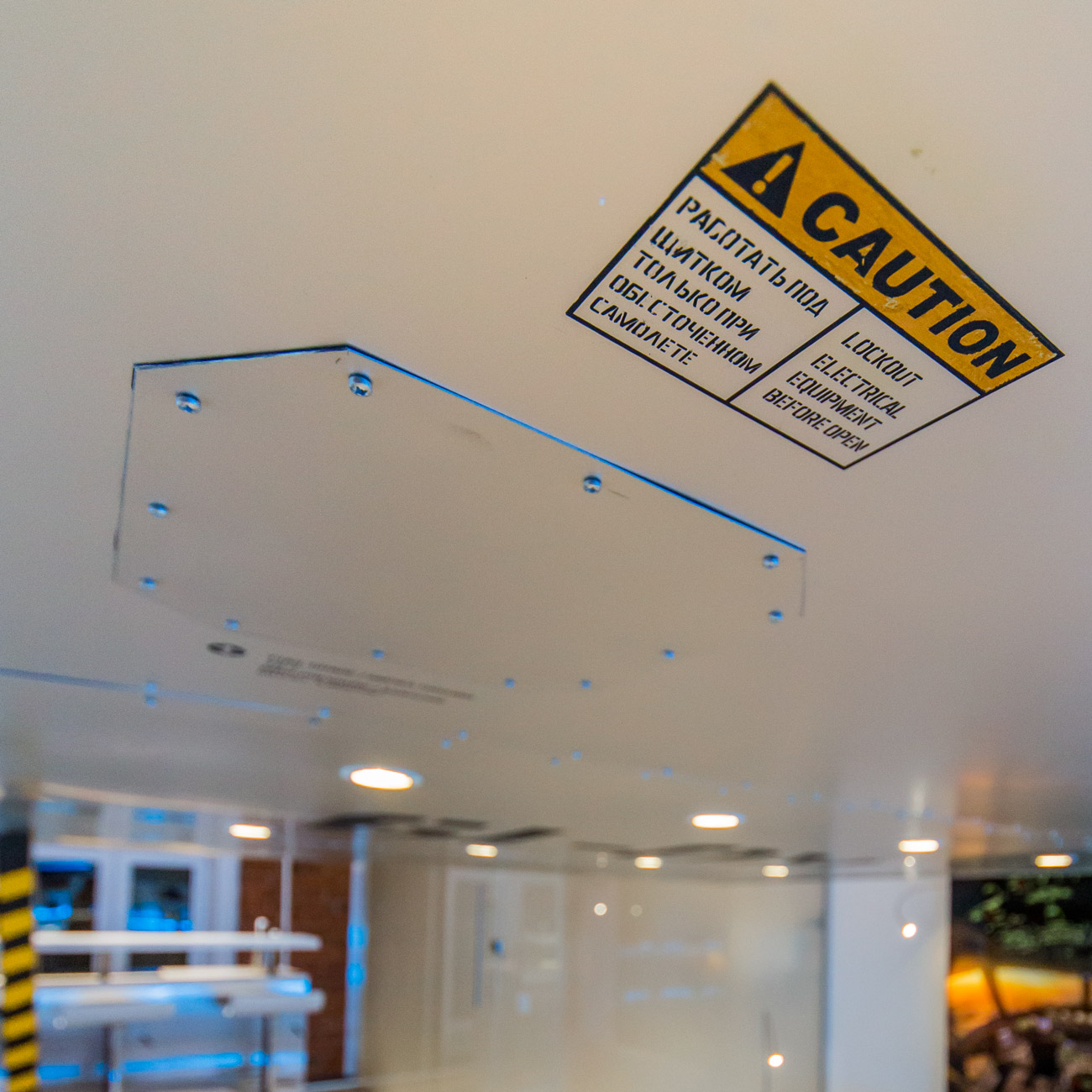 The second storey is hooked on the metal channel bars in the ceiling and has no bearing on the floor. This gives the heavy construction a feeling of lightness similar to standing under the wing of the airplane. The aviation prefix «Ro» for the board applied to the wing in accordance with the Convention on Civil Aviation, and the identification number 19 goes back to the date of the birth of Mama Ro: July 19, 2012. The steel bird flies on the fuel of the TS-1 brand.

The guest on board will find an unprecedented standard for the comfort of airline civilians: the possibility to stretch your legs during the flight, a large personal screen, Internet access, etc. But, at the same time, there is a large metal beam with the navigation lights which serves as a striking contrast to what you can find in any air harbor. We kept it on purpose. 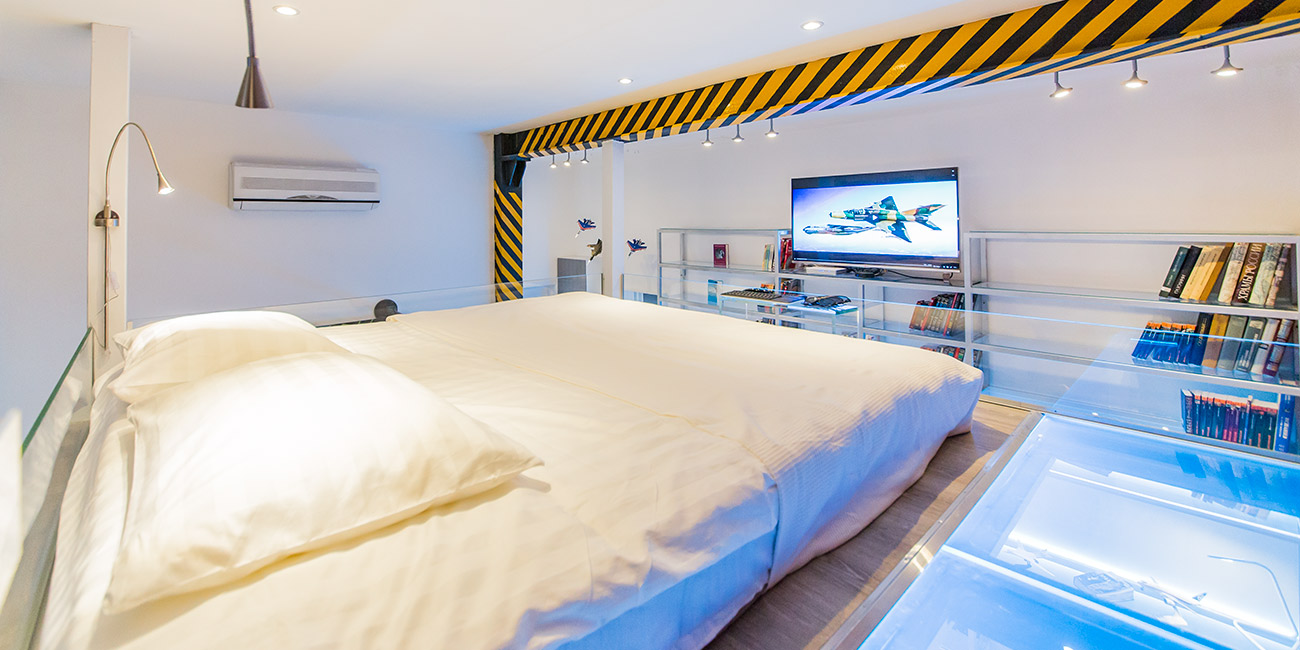 The new supporting structures in the mansion from basement to attic were built during the construction work. When a large I-beam passed through the future studio, we realized that this was what we needed. This is why we decided not to hide it in the drywall, but on the contrary covered it with black and yellow marking which can be often found at airports.

The board was almost ready. All that remained was to lift it up into the air. What could help in creating an atmosphere of flight in the studio? We remembered the chamber feeling of night flights, when passengers are sleeping, the sky behind immersed in the blue gradient and there are cozy light beams only above some of the seats. 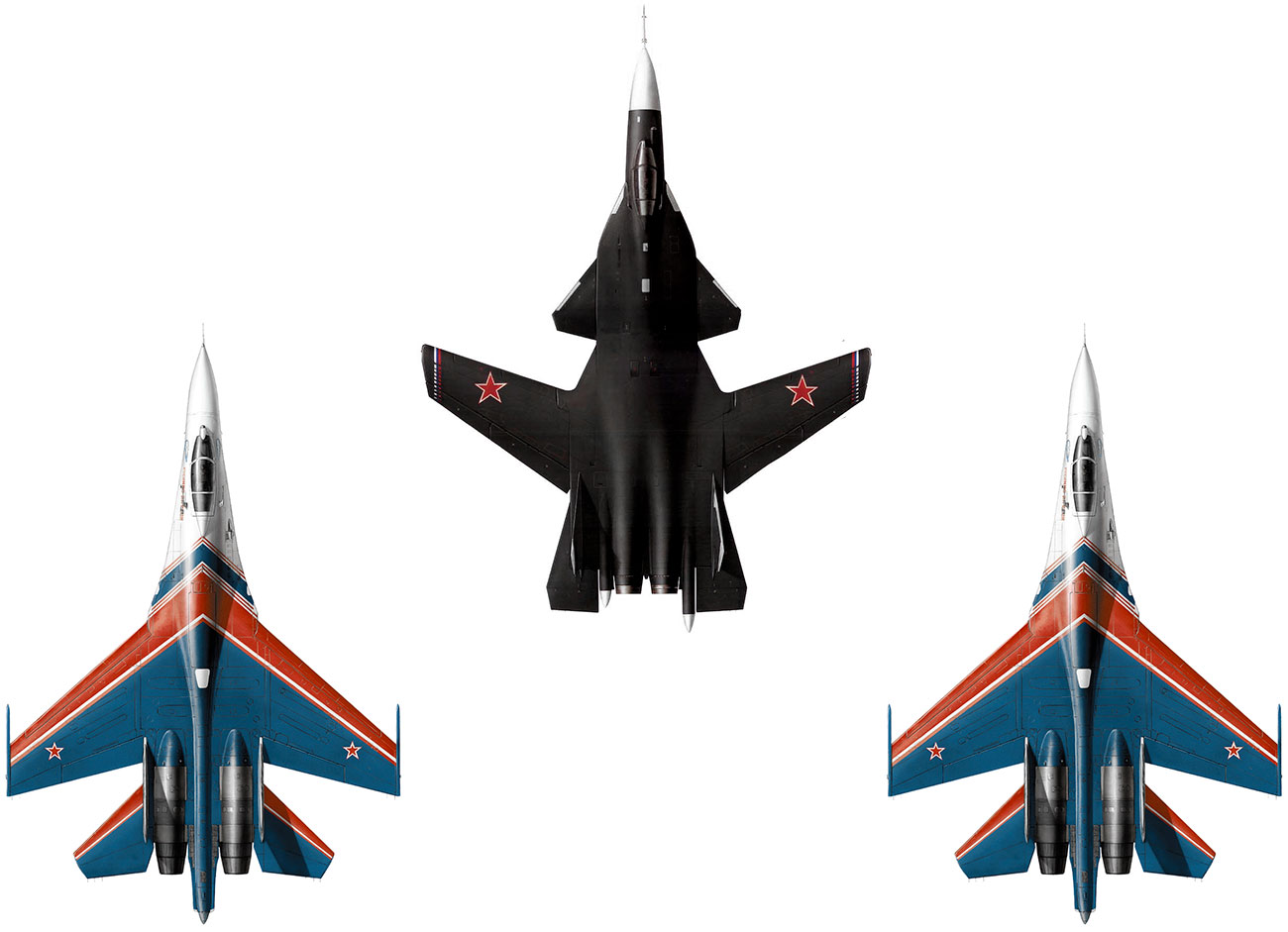 The “flight” mode is also provided in the studio lighting, when
only the blue LED lights and spotlights on a flexible leg are on. A beam of yellow light focused on the book or magazine perfectly completes the outline of the flight experience. 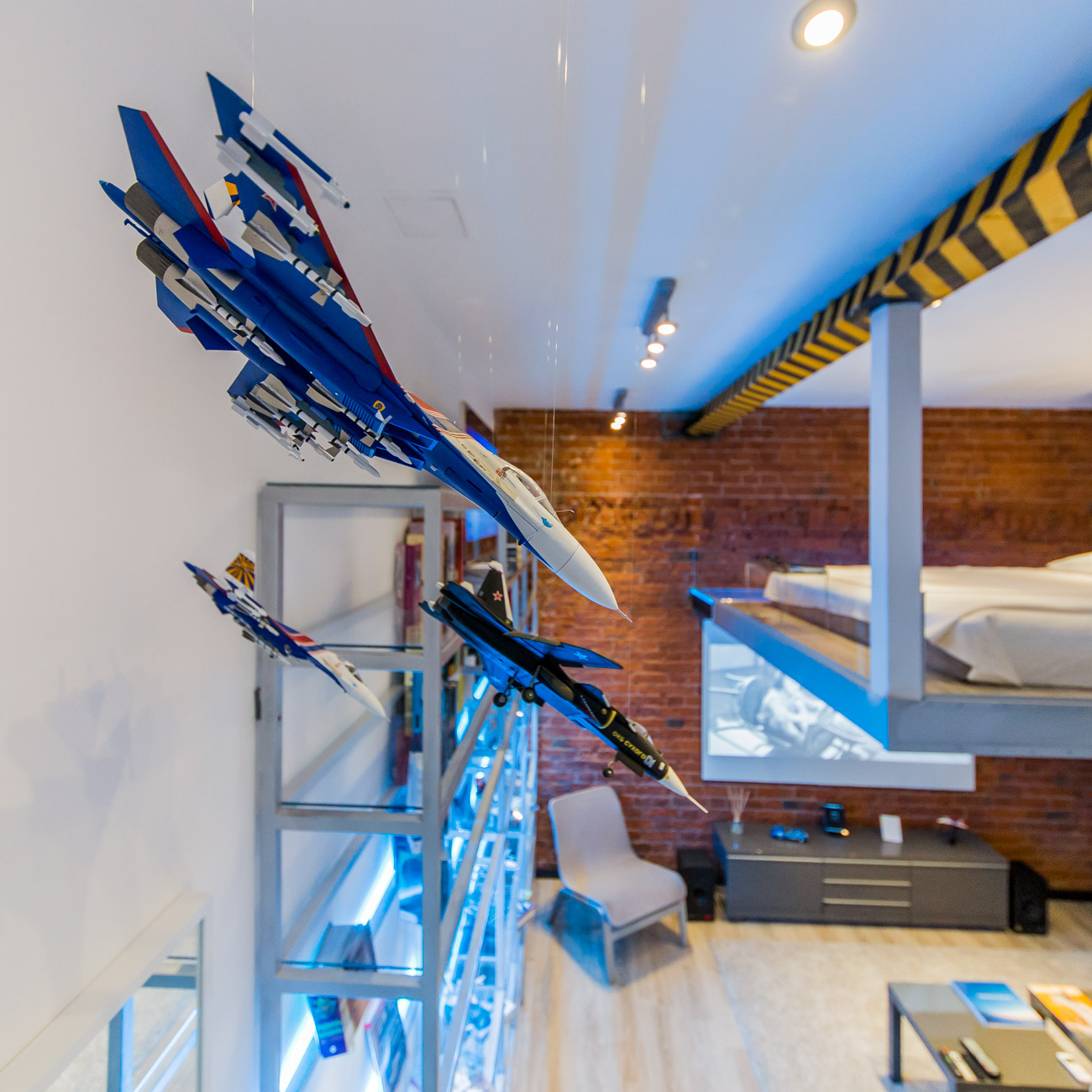 Escort by the Fighter Aircrafts

In each of our studios we pay great attention to details. We start selecting books, figurines, and copies of cars that are in the spirit of the studio. The Avia studio is a particular case. We ordered special winged cars for it: two fighters arrived to escort the Ro-19 – the Su-35 led by the experimental Su-47.

We watched an air show and admired this trio, remembering the words of the famous aircraft designer in relation to the studio: it’s probably true that it’s not only ugly airplanes that do not fly, but neither do ugly studios. When we came back, we got the trio that we admired in exactly the same combination as a symbol of the studio.

Why is the image of children
on an oak branch a metaphor
for the first and second studios,
and why it is inspirational when
a startup doesn’t receive financial aid.

Why is the image
of children on an oak
branch a metaphor for the
first and second studios, and
why it is inspirational when
a startup doesn’t receive
financial aid.